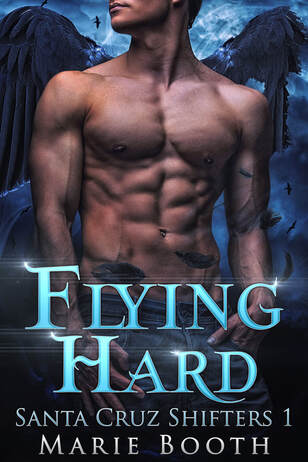 FLYING HARD
SANTA CRUZ SHIFTERS BOOK 1
​Ty wants to fly. It's just not in the cards.
I'm a hybrid shifter, a freak who doesn’t fit. Can't live in raven territory cause my wing is damaged. Pumas don't want me cause I shift to raven. I spend my nights drinking my memories away or screwing them into oblivion.  But the most glorious male I've ever seen needs my help, and even though Dex says he doesn't want me, I know he's as hot for me as I am for him. Yeah, I'm a slut, but I'll make this alpha god beg for my body. I’m already begging for his.

Dex wants a home, a peaceful life and maybe a dozen donuts.
My pack kicked me out, my mate died in the Shifter Wars and I've survived three years living rough. But I’ve discovered a new territory in the Santa Cruz Mountains and it may turn out to be the kind of home I've searched for.  Only this crazy raven shifter keeps throwing himself at me. Yeah, he's hot as shit and he makes me smile, even laugh, but I may never be ready to settle down again. Especially not with a shifter who takes anything with a beating heart to his bed.  No. If Ty wants to be with me, he's going to have to follow my rules. Alpha rules.
​
And when violent members of my old pack come sniffing around my new territory, I realize I’m going to have to lead the  defense of Half Moon and protect the hybrid who’s stealing my heart.
Flying Hard: Click for More Info 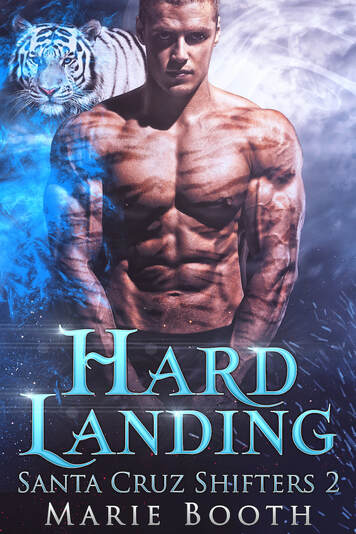 Hard Landing - Book 2
Caden, the son of a prime alpha wolf, wants the tiger who saved his life to take him up on his offer.
Caden: My father, the alpha of our pack, was murdered, only I'm not alpha material no matter what my family thinks. Half Moon Territory gave me and the vulnerable members of my old pack a home, so now I spend my time working on cars and lusting after the most beautiful tiger who ever walked the coastline. Rav could have abandoned me, but instead he made sure I got the medical help I needed, even when depression kicked me in the gut.
Only Rav has turned into a bull headed hermit who wants nothing to do with me. He let it slip it's because I'm a wolf, but I'm not buying that. He may have his secrets, but my wolf and I intend to claim him, no matter how many times he pushes me away.
Rav wants to tend his orchard in peace and forget about the wolves who haunt his dreams, especially the hot one who won't stop stalking him.
Rav: Caden is going to be the death of me. My tiger has already set his part of our heart on Caden's wolf, no matter how many times I explain that wolves and tigers will never fit together. Not after what was done to me and my clan. Or after what I did in return.
My clan's businesses are strong, our secrets have held, and no one in Half Moon needs to know about our past. If only the stubborn wolf wouldn't keep showing up, nudging his way into my life, getting under my skin in every way but the way my body really desires.
I tell myself wolves can't be trusted, but day by day, Caden weakens my resolve. If I tell him the truth he'll run and the bits of hope I've managed to gather will shatter. I'm not sure I'd survive, so it's better to stay strong.
Hard Landing: Click for More Info 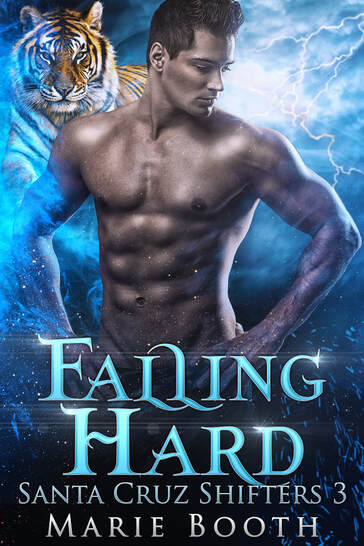 Falling Hard - Book 3
Ramon, a lynx shifter with a reputation as a player, is certain Haven is The One, but Haven, a bengal tiger shifter, is determined to go on a trek through the Sierra to meet with various clans and packs and hopefully find his true mate. His home in Half Moon territory doesn't hold the same appeal and the perfect male from his dreams is calling his name. He's out there somewhere...

When Haven leaves, Ramon, a male who's never spent time in the mountains, decides to follow. His sisters try to talk him out of it, but Ramon's mind is made up. How tough can camping in the high country be? He's bringing every piece of equipment he can think of as well as lots of snacks. Haven will probably take one look at his sacrifice and throw himself into Ramon's arms. 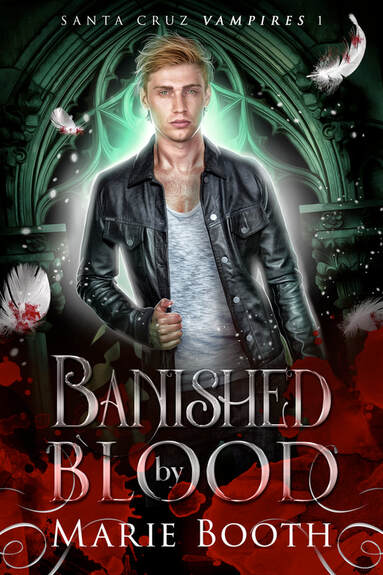 ​BANISHED BY BLOOD - BOOK 1 - Ezra and Asher's story
Ezra thinks his job sucks eggs.
My team of former angels - now vampires - won't make an effort to get along or follow orders. Kaziel, our master, is a jerk who rarely takes any interest in the nest's progress or lack thereof. Michael, my former archangel, refuses to hear my petition to return to The Realm of Light so I can plead my case. I should never have been banished and sent to Earth.
To top things off, I've been told another new recruit is about to get kicked through the portal. As usual, I'm the one who'll have to mentor the newbie and see him through the difficult transition to vampire. This one's a healer from Raphael's legion. Ha! I wish him luck. This thrown-together bunch can't even agree on the time.
Asher is excited to take a temporary journey to the mortal realm.
I've healed angels from all four legions, becoming one of Raphael’s top healers. Now there’s a job for me on Earth in the town of Santa Cruz, part of the new territory of Costa Larga. I haven’t been given any information as to what I’ll be doing, but that’s never hindered me before.
Ezekiel, Michael's third in command, is one of the six angels I’ll be working with. A male I've admired since I first came through the aether and grew my wings. This explains why he’s been out of sight for five years. He too must have been assigned a job on Earth.
A clerk from Uriel’s legion shoves me toward an open door. Michael's second in command greets me holding a bloody sword. I clutch the small bag of favorite possessions closely to my chest and tremble as doubt floods my mind. What fate truly awaits me?

Dying for a Bite - A M/M/F Rom Com Vampire Menage. 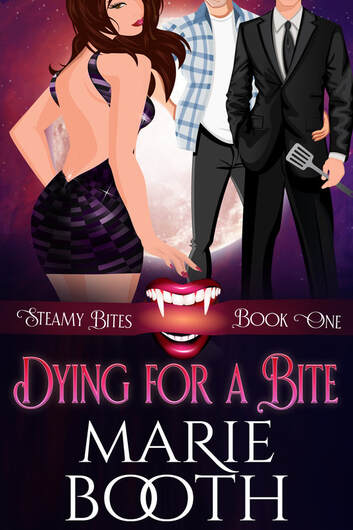 ​​Estelle’s a sweet Southern girl with lots of spirit but low self-esteem when it comes to her very curvy body. When she’s seduced and bitten by two of the sexiest, most desirable vampires in Shortfalls, Georgia, her sexuality comes alive for the first time. Thanks to the two sexy hunks she’s living with, she discovers her erogenous zones are her favorite highway to heaven. Could un-life get any better?

Nathaniel enjoyed seducing bloody gorgeous Estelle, but when her charms worked their magic on him, he lost control and bit her. Now he’s her maker, responsible for her training. While he plans to enjoy every minute of Estelle’s sexual instruction, particularly sharing her with the love of his life, Maurice, Maurice is not as enthusiastic.

When Estelle intrudes on his perfect life with Nathan, Maurice is not happy. Sure, the woman’s body is easy to arouse and enjoy--he has to admit--but he’s now determined to take back control. The fangs are coming out and so are the cuffs.

But when danger strikes their nest in the form of a rival gang, Estelle, Nathaniel and Maurice learn they’re bound together by more than sex and blood.
Dying for a Bite: Click for More Info

THETA SERIES - An Urban Fantasy/Paranormal Romance set in post apocalyptic NYC
Formerly published under author name Gayle Parness
Supernaturals have come out of hiding and humans are at the bottom of the food chain.
But a group of thetas - a new race of psychics - might be  about to flip that  situation on its ear. 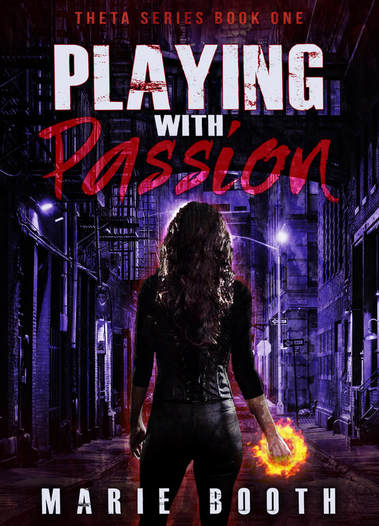 ​ BOOK ONE::A slave to the archdemon known as the Director, Ingrid has spent her life forced to project fantasies for alpha werewolves and master vampires, sometimes becoming a victim of those fantasies herself. But she's determined to break free. All she needs is a little cooperation and magical help from her powerful and very sexy production manager, Mack.

Mack protects his troupe and powers the theta performances with his axis energy, that's his job. He makes sure every show goes smoothly for the actors and the audience, he keeps the quality up so that ticket sales are good and The Director's happy, and most important, he makes sure none of his actors does anything that might get them retired—another word for executed. But this sexy new leading lady is causing trouble, using too much power, running experiments with her magic, endangering them all.

When Mack attempts to put a stop to Ingrid's reckless behavior, Ingrid and Mack find they're connected in a way neither one of them could have imagined, forcing Mack to finally listen to Ingrid's plans for a life free from the Director's tyranny. 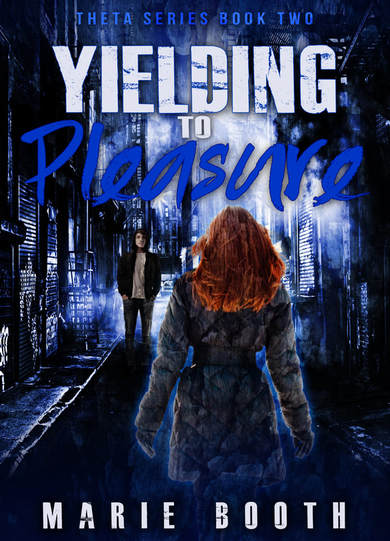 ​ BOOK TWO : Matteo, a street theta from Brooklyn, NY has kept his neighborhood clear of supernatural criminals for the past five years. Ten years ago, demons killed his father and kidnapped his sister, Bella. Now he's sworn to find his sister and avenge his father.

Anne, an escaped troupe theta, is hiding out in Manhattan, hunted by The Director’s soldiers and barely surviving. After a brutal attack, she’s shocked to find herself in the apartment of a sexy Latino street theta determined to nurse her back to health. Somehow she has to keep her identity a secret or else both their lives will be in danger.

Gene is now the leader of the rebellion against The Director’s tyranny, recruiting new thetas and struggling with the choices he's forced to make. When Matteo and Anne need his help, he does his best to convince them to become part of his team. But when a former enemy tries to form an alliance, and a trusted friend goes behind his back, his long-term plans begin to collapse.